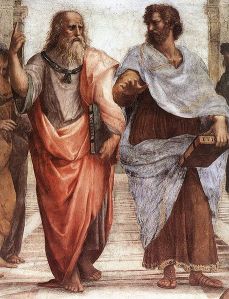 “Tell me your prefered prepositional language for locating “Prime Reality” and I’ll tell you your basic worldview orientation.”

The Transcendent Idealist “locates” the Prime Reality as being figuratively and metaphorically above us as the Universal (Platonic) Forms of the Good, the True and the Beautiful. It may also point to the Prime Reality as consisting of Eternal Being, Mind, Spirit or Essence that  dwells within, among, through and between us.

The Scientific Materialist “locates” the Prime Reality as being figuratively and metaphorically below us in the material and natural world as discovered by physics and biology, not in the “epiphenomenal” world of consciousness and mind.

The Metaphysical Dualist “locates” the Prime Reality as figuratively and metaphorically both Above and Below in two separate orders of reality — the Spiritual and Physical, Invisible and Visible, Heavenly and Earthly, Mental and Physical, Eternal and Temporal, Infinite and Finite, Necessary and Contingent, Essential and Existential. The Metaphysical Dualist is “a citizen of two worlds,” and has two different ways of knowing — one numinous, intuitive and affective, the other sensory, rational and empirical.

The Process Panpsychist (and Pan-en-theist) “locates” the Prime Reality as figuratively and metaphorically in the dynamic co-arising synthesis of Mind (above) and Matter (below), and as dynamically ahead of us in the emergent historical and eschatological future where “Matter is becoming Spiritualized” through the evolutionary lure of creative novelty .

The Post-Modern Eclectic Ironist “locates” the Prime Reality as “sort of here, there, everywhere, and nowhere” since we live in an irreducibly fragmented, ambiguous and “polyphrenic” world of multiple “local narratives” that defy pluralistic integration through any Grand Theory of Everything, whether naturalistic or metaphysical.

The Trans-Modern Integral Pluralist “locates” the Prime Reality as being present in all epistemological quadrants, including the internal intentional and cultural, and the external behavioral and social quadrants; and in all the metaphysical levels, including the material, organic, mental, soulful and spiritual levels of being and existence. Ken Wilber calls this approach AQAL: All Quadrants, All Levels.

Of course one problem with our employment of language is that it is easy to “conflate” figurative and factual language and to “reify” metaphorical language into metaphysical language, thus claiming to know more than we really do, and claiming it with ideological authority and dogmatic certitude. We forget that “the map is not the territory,” and that our “useful paradigms” are not necessarily “reality itself” in all its plenitude and diversity, but rather our best attempts to make connections and correlations beween the concepts of our finite, conditioned and situated mind on the one hand and the expansive, unbounded and encompassing reality of “what is” on the other.

The Metaphysical “Agnostic” and “Ignostic” do not try to use figurative and metaphorical language to locate the Prime Reality “anywhere”. The Agnostic may decide that the question of the nature of Prime Reality is simply unknowable and undecidable. He may decide that it is even more than a “Hard Problem” that science or philosophy will eventually “Solve”. He may decide that it is an Ineffable Mystery in which we dwell but that we cannot ever fully comprehend or capture with our finite, conditioned and situated minds.

Of course there are different kinds of agnostics. Some insist that because they do not not claim to know the nature of Prime Reality that therefore no one else can know much about it, and that therefore their mission in life is to shoot down anyone who makes metaphysical claims. Some agnostics may lean toward one worldview or another, whether toward dualism, idealism, materialism or panpsychism, but are not ready to commit and go public, only to “weigh and consider.” Thomas Nagel (Mind and Cosmos) and David Chalmers (The Conscious Mind) are two examples of philosophical and scientific thinkers who reject physicalist reductionism and to remain “agnostic” but with strong panpsychist sympathies. But neither are they “true believers.”

The “Ignostic” will say, “I don’t know and I don’t care.” The question of the nature of Prime Reality and our relationship to that Reality is simply not a question that interests me. Metaphysical questions are a waste of time. Epistemological questions are a waste of time. The main thing is to live each day as fully and freely as you can, to emerse and lose yourself in the stream of experience, to enjoy the ride and have a good time.

It is possible to ask questions about that nature of Prime Reality as if it were exclusively “Out There” in the so-called objective empirical  world of “Matter and Energy” and not “In Here” in the so-called subjective world of “Mind and Consciousness.” Quantum mechanics tells us that “the subject influences that which is observed.” The possible implications for this shocking claim are still being thrashed out by scientists and philosophers who are interpreting the meaning of Quantum Mechanics in different ways.

One implication may be that rather than think of the Prime Reality as something exclusively autonomous and separate from mind and subjectivity we may have to consider the possibility that mind and matter, subjectivity and objectivity may be “entangled” as two sides of the implicit and explicit order. A “Relativity and Quantum Universe” in which both Albert Einstein and Niels Bohr are both “partly right” is a wild and weird universe indeed. We appear to be on the threshold of a new era in both science and philosophy in which the “propositions” we use to figuratively and metaphorically “locate” Prime Reality must undergo yet another radical and profound “paradigm shift.”

What if Prime Reality includes not only the properties of matter and energy in space and time, but also mind and consciousness outside of space and time? And what if matter and energy, mind and consciousness are “quantum entangled” with each other in a non-local relationship? Then we would have to ask not only the question, “What is the nature of Prime Reality” but “Who is asking the question and from what viewpoint?” What if the external, objectivist, third person account of reality that “excludes the participation of the subject” is itself an illusion? What if the “subject” knowingly or unknowingly participates in and influences that which is observed? What if there is no “view from nowhere?” What if all viewpoints are irreducibly partial and perspectival? What if more than one perspective and viewpoint could be partly right? Wouldn’t that be a game-changer? Would that not give us a richer and fuller account of the nature of reality than one that only looks at things dualistically from either inside or outside, above or below, behind or before? Could it be that “we have met the enemy and he is partly right?”

Philosophical Reflections and Musings on the Great Questions of Life