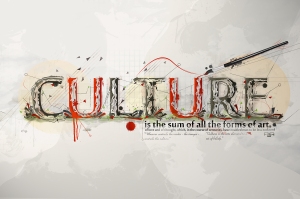 Culture (Latin: cultura, lit. “cultivation”[1]) is a modern concept based on a term first used in classical antiquity by the Roman orator Cicero: “cultura animi” (cultivation of the soul). This non-agricultural use of the term “culture” re-appeared in modern Europe in the 17th century referring to the betterment or refinement of individuals, especially through education. During the 18th and 19th century it came to refer more frequently to the common reference points of whole peoples, and discussion of the term was often connected to national aspirations or ideals. Some scientists such as Edward Tylor used the term “culture” to refer to a universal human capacity.

In the 20th century, “culture” emerged as a central concept in anthropology, encompassing the range of human phenomena that cannot be directly attributed to genetic inheritance. Specifically, the term “culture” in American anthropology had two meanings:

Hoebel describes culture as an integrated system of learned behavior patterns which are characteristic of the members of a society and which are not a result of biological inheritance.[3]

Distinctions are currently made between the physical artifacts created by a society, its so-called material culture, and everything else,[4] the intangibles such as language, customs, etc. that are the main referent of the term “culture”.

As the Wikipedia article makes clear, the word “culture” has undergone a number of changes in meaning throughout the ages. For Cicero is meant “the cultivation of the soul.” Some people still think of culture as having something to do with the care and cultivation of the soul, the habits of the heart. The expression “state-craft is soul-craft” reflects this classical view.

“In modern Europe in the 17th century culture began referring to the betterment or refinement of individuals, especially through education.” Matthew Arnold’s famous essay, Culture and Anarchy, is an appeal for universal public access to literal arts education as a hedge against both anarchy and totalitarianism. He saw “culture” as essentially related to the knowledge of the humanities, arts and sciences, including the best that had been said and written across the ages by history’s most original and influential minds.

“During the 18th and 19th century “culture” came to refer more frequently to the common reference points of whole peoples, and discussion of the term was often connected to national aspirations or ideals.” One might speak of “European Culture,” and within it to speak, for instance, of English, French, Dutch, German, Italian and Spanish cultures. Culture became a word to designate “the soul of a nation.”

“Some scientists such as Edward Tylor used the term “culture” to refer to a universal human capacity.” Here “culture” has to do with the ways in which all individuals make meaning of their world through drawing upon the various elements that constitute their culture. These include stories, rituals, symbols, traditions, beliefs, values, habits and mores. Every one enhabits a culture and interacts with it in various ways. There is no such thing as “the view from nowhere.” All of our perceptions and perspectives are “culturally conditioned” in one degree to another. We see life through the lenses and filters of our culture. Those who live in highly complex cultures may experience “the saturated self” in which multiple and conflicting “identities” and “affiliations” compete with each other and co-exist in a bewilderingly contradictory social environment. The good news is that sometimes “creativity” may be born of such a chaotic environment thas quesions and challenges all cultural and social norms as provisional and relative. We live in a chaordic world.

“In the 20th century, “culture” emerged as a central concept in anthropology, encompassing the range of human phenomena that cannot be directly attributed to genetic inheritance.”

The idea here is that cultural anthropology and other social sciences have vastly expanded the concept of “culture” to include virtually everything that is not covered by the domain of the physical and natural sciences. In fact, the social sciences are pushing back against of the hegemony of the physical and natural sciences that would reduce all phenomena to math, physics, chemistry and biology. Examples of this social science approach to culture include such books as “Beyond Human Nature: How Culture and Experience Shape the Human Mind, by Jesse Prinz; Wired for Culture: Origins of the Human Social Mind, by Mark Pagel; The Saturated Self: Dilemmas of Identity in Contemporary Life (meaning culture), by Kenneth Gergen; Maps of the Imagination: The Writer as Cartographer (of consciousness and culture), by Peter Truchi.

Clearly our personal and collective lives are influenced by both Nature and Culture. The influences of Nature tend to appear as relatively deterministic. But evolutionary emergence has apparently taken a quantum leap from Nature to Culture. It is in the realm of Culture that we perceive the emergence of “creative freedom” to re-imagine and re-construct our possible selves, the symbolic world, the civil society, and the planetary future. In so far as the anthropological field encompasses all cultural phenomena, the challenge becomes one of using our moral imagination and creative intelligence to construct a better society and world.

As Keith Ward writes in commending the Aristotelian view of the relationship between virtue, empathy, knowledge and culture: “The distinctive virtues of a human life are intelligent freedom and creativity, conscious appreciation and understanding, and the fostering of social cooperation and compassion. These are the objects of intelligent and informed moral choice, and they involve the cultivation of feelings that can more fully realize the possibilities of a good human life.” (Source: More than Matter? Is There More to Life than Molecules?)

We can choose to passively and mindlessly accept the culture in which we happen to have been born and raised, or we can choose to become the co-creators of our culture, to become “culturally creative social artists” in the way we develop our minds and live our lives, integrating such values as transcendent wonder, self-creation, human solidarity and ecological sustainability. Culture is always a work-in-progress, as are our lives.

Philosophical Reflections and Musings on the Great Questions of Life